The following ramble is purely the opinion and thoughts of the author and is not endorsed by the association although I expect my fellow fowlers will correct me where they find inaccuracies. PC.

For centuries right up to the late 1800's, for some, wildfowling was a necessity to keep the family from starving and pay the rent. This led man to venture out on to the water to ensure success. Although exposed to constant danger and physical hardship this water borne gunner could stalk great rafts of wildfowl and was not limited by wind and time of day. All round the UK coast various craft were utilised to carry punt guns of different length and bore, some reaching 9 ft in length and weighing 180 lb. For those that would like to momentarily return to those days and gain an insight in to the characters that lived and toiled on Breydon estuary then they will find no better read than Arthur Patterson's (John Knowlittle) "Wildfowlers & Poachers".

The days of the professional punts man and the great bags have long past but the specialised craft that served them so well lives on. 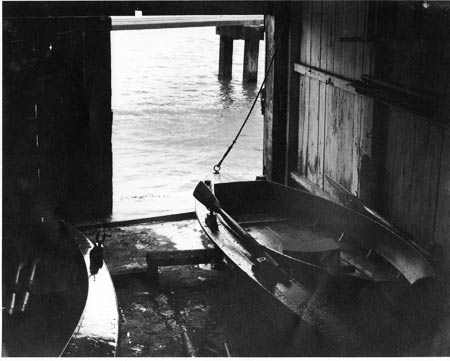 "On the Wash, round about Lynn, they use long, narrow, open punts which are little better than floating planks. They are unsafe and unseaworthy but tremendously fast. The Lynn punters swear by them because they can take them in and out over the thousand acres of sandbanks on the wash. The beginner cannot choose a better way of drowning himself. " 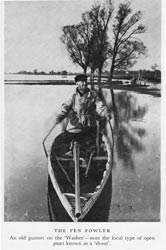 Pic: Courtesy of the “The Modern Fowler”

"The Norfolk punt, such as you see on Breydon and the broads, at Blakeney and on some of the Suffolk estuaries, is decked over fore and aft, with a scantling round the cockpit, a cradle to hold gun and considerably more beam. It is the most seaworthy of all the punts and in my opinion, the best for all round work anywhere. The Essex punt is much lighter, clinker built, completely open from stem to stern, and more liable to "sheer about" when paddling. I have seen a punt from the Solway which looked like an Esqimaux Kayak, double ended, decked over craft with a cockpit barely large enough to hold man and gun , a perfect death trap." 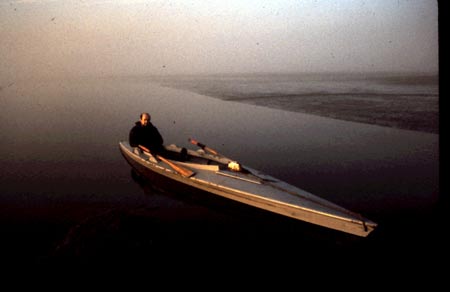 J WD later goes on to yet again applaud the merits of the Norfolk Punt mentioning that a "Norwich firm Messrs "Brooke" entered the punt building field before the war with a small single Norfolk complete with oars and sail for £15". 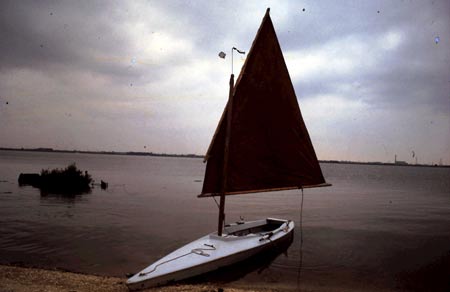 He goes on to mention for the purposes of strong tides and choppy seas and with safety and confidence in mind the sea-going double handed punt comes in to its own. Such craft allows two men to face the extremes of the weather and remain afloat to take advantage of the birds movements. And stay afloat they did, using the tides and taking the opportunities that the weather presented such epic hours can be best relived by reading Peter Scott's "Twelve hours afloat" in Wild Chorus, on the wash, plus you get to appreciate the wonderful scenes and estuary moods with his superb painting and sketches.

J WD goes on to say that "within his mind no other form of shooting possesses quite the particular charm of punting, it can be slavery, and it can be equally be romance".

The GYWCA used to have punts shed in Cobholm. 30 years ago, it was one of those salty, curious, fascinating places containing everything ducks, boats, fishing and shooting, flotsam and jetsam purposely picked off the flats or collected off the wall, it was as near to the Arthur Patterson's "Albert Becketts Workshop" I will ever muster. (Interestingly Beckett could be an ancestor, on my mothers side). 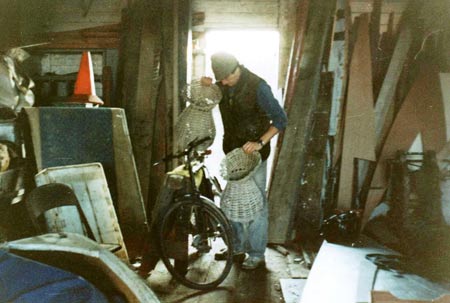 Redevelopment later saw the punt sheds lost but for the last 50 years or more (we await their tales) several of the members have been going afloat summer and winter to continue to enjoy the estuary or to harvest the duck with shoulder guns. In addition, the punts have been used to ferry people and materials over the flats during conservation work. 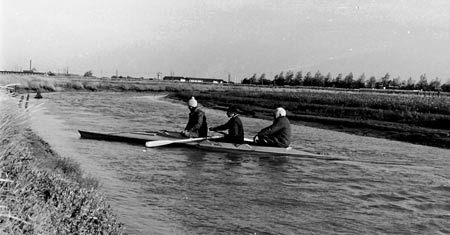 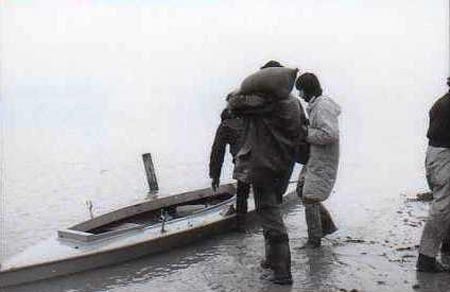 Ferry across the drain and loading up with shingle for the tern rafts, Pic: P Carrier

But the punt was never meant to be a cart horse, its lines, stability, draft and handling made it the ultimate stealth machine, low in the water, coloured grey, its proven design was to be nigh invisible till too late. 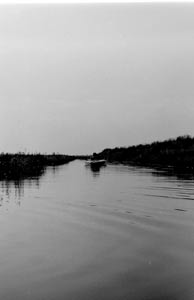 Going out in a punt, even on an internal estuary like Breydon is not undertaken without risk, Alan Savory in his "Norfolk Fowler" states although "he found Breydon fascinating he had found it to be a dangerous place". His section "with the old gunners" particularly recalls the dangers of Breydon and ice floes.

I am fortunate to have had experienced Breydon by punt a handful of times, back in the days when I thought I was indestructible, but never enough to call myself a Breydon Pirate. I vividly recall how my fellow punters would teach me the ways of the craft, especially taking every precaution to keep the mud out of the punt. For those not versed in the ways of Breydon, the mud gets "EVERYWHERE", should you let it! 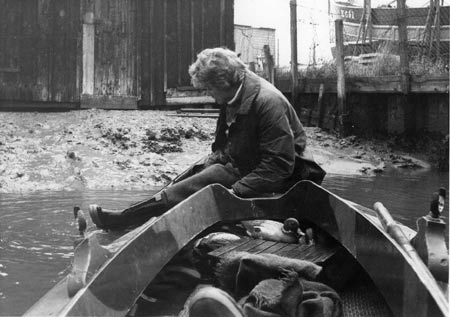 Pic: Karl N cleans off before pushing us out of the sheds 1980’s. P Carrier

"On a half hearted guess we would have thick mist over Breydon DE picked me up at 6.50am. The tide was one hour off the top of the flood and it turned out that we had to contend with just light mist and a very slight breeze. D rowed us up to the mouth of the large drain and from there we could see 100 fowl floating off the lumps 100 yards out from the tern island. We decided to stalk, so laying flat using only small hand paddles we edged our way slowly round the front edge of the rond. As we went we put up oyster catchers, cormorants, and numerous waders, although none seemed overly surprised. Finally, gaining 40 yards from the tip we would swing on to the flat mud shelf. D took a peek and reported back that he could make out duck through the salt marsh. It seemed we had managed to punt within 40 yards of them and were now dead opposite. 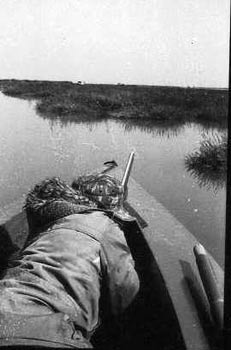 D slowly pushed us on to the rond to steady the punt and with held breath, anticipation and excitement we both braced ourselves. Suddenly a dozen Pintail lifted, then a large pack of mallard, we both sat up and fired and two fat mallard fell back. Duck for tea! We rowed round and picked them up to find that one was a rung bird, bred and released by the Association, as part of their conservation programme. 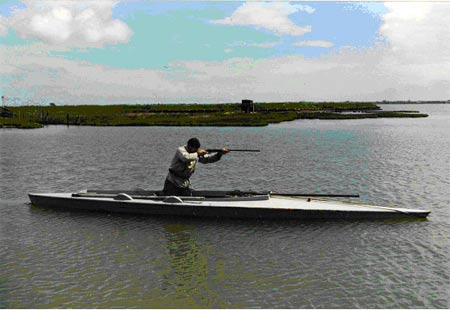 With some satisfaction at a successful stalk we put out 7 deeks and once more laid low in the punt now nestled in by the tern island. After half an hour I finally stopped talking when a mallard landed some 400 yards off and started to swim in to the decoys, teal started to zoom in, but we found we were a little to visible. We moved in to the salt marsh opposite, all the time countless knot, redshank were wheeling round, waiting for the mud to be uncovered.

Shelduck joined the decoys, but the quarry duck was keeping away. We could see Pintail, Mallard and widgeon in packs floating some way off, so collecting the decoys we decided to see how near we could drift on to them. We rowed to lee side, pushed the punt round and took a direct line, we had some ¼ of a mile to go. During the drift we put Brent geese up both wondering why we had not seen them earlier. Duck where now in front and I talked D in to going up front with his 8 bore. I paddled forward slowly; I should have been using a short pole but had mislaid it. Widgeon were suddenly overhead but D was dreaming of a Pintail. 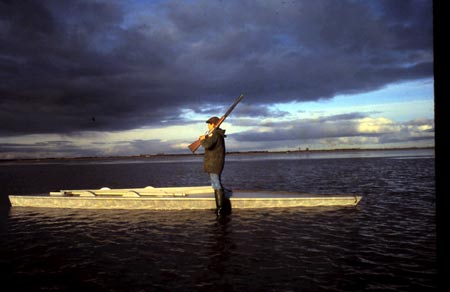 200 yards to go duck were dropping in to the pack all the time, more widgeon overhead, mallard winging round. Round about 120 yards the whole lot lifted and although dozens come right over head in range D choose not to fire, both of us just living the experience.

We called it a day and what a classic!. I wrote in my book that it was nothing short of perfect and had suspicions that it would never be repeated... I was right!

Although the days of the punt guns have gone the craft themselves still provide a magical means to explore the mudflats and creeks. Although no longer having a punt shed, plus the lack of places to launch the punts a number of the GYWCA members still jealously guard their craft. 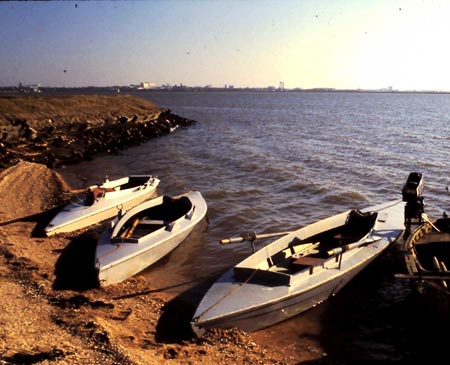 The hope is that some day, we will once more put them out on a raising tide and

glide across the open expanse watching duck lift. The Association has a punt exhibition which Michael kindly karts around when ever possible and another is visible at the "Time and Tide" Great Yarmouth.

I hope you have enjoyed this little ramble around Breydon punts, I suspect that it will be added and amended to by member personal stories and further pictures so remember to revisit.